To me, Bakewell tarts are a quintessential part of England, but apparently (and sadly), they are quite rare in the US. My sister and I absolutely loved these growing up, and since we do not get to go to England as often as we used to, I decided to recreate this treasured delight for us.

Now, when I think of a Bakewell, I think of the sort which is sold in Tesco or other groceries or sandwich shops – that is the Mr Kipling’s variety. For those of you who don’t know, Mr Kipling:Britain as Entenmann’s:America. As I set out upon my quest for a recipe, I found that people seem to treat the Mr Kipling’s Bakewell with a significant measure of derision! Apparently, they are more interested in recreating the original Bakewell pudding (the forefather of the Bakewell tart) or a Bakewell tart from some historically correct 19th century recipe, a la Eliza Acton or Mrs Beeton. Not I! I wanted the Bakewell that I grew up with!

So I made up my own recipe: shortcrust, filled with a layer of raspberry jam, topped with almond sponge, topped with marzipan and a cherry. I believe Mr Kipling uses some sort of rolled fondant (aka sugarpaste) – I made the mistake of trying to use European fondant, which is apparently used for making the sculptures that people decorate cakes with. And I made this very sticky and messy mistake at 2AM, so when I finished clearing it up, I decided to just slap together some marzipan and put it on top, figuring that it would complement the almond sponge well (and then I made citrus fruits with the leftover marzipan). 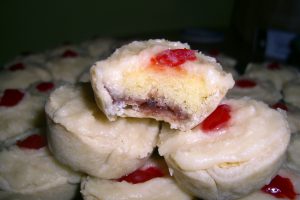 1. To make the shortcrust, sift the flour into a bowl. Using a pastry cutter, cut the butter and shortening into the flour until it forms coarse crumbs. Pour the ice water over the mixture, tablespoon by tablespoon, until it begins to come together. Shape into a disk and refrigerate for at least 30 mins.
2. Preheat the oven to 350o. Remove the dough from the refrigerator and roll out to between 1/16″ and 1/8″ thick. (Because I make really tiny tartlets, I try to roll my dough as thinly as possible to leave plenty of room for the filling, which is obviously the best part). Cut into rounds and line a tartlet pan with them.
4. Prick the bottom of each tartlet shell with a fork (to prevent puffing), place in freezer for 5 mins, then prebake for 8 minutes. Remove the shells from the oven and let cool to room temperature.
5. Meanwhile, make the filling. Beat the butter with the sugar until creamy, then add the eggs and almond extract. In a separate bowl, whisk the flour together with the baking soda and ground almonds. Beat this into the butter mixture until fluffy.
6. Spread a thin layer of raspberry jam in the bottom of each tartlet shell, then spoon some of the filling mixture on top. The fillin will puff a bit, so do not fill the shells quite to the top. Bake for 18 to 20 minutes, until the tops are lightly browned. Remove from the oven and let cool completely in the tartlet pan on a wire rack.
7. Finally, make the marzipan topping. In a large bowl, whisk together the ground almonds and sugar. Stir in the eggs, almond extract and vanilla, then spread on top of each tartlet, and top with a cherry piece.

Makes about 32 tartlets (in my super-small pans)